UNITE is very grateful to the Committee for giving us an opportunity at the meeting to represent the views of members who are Psychodynamic Psychotherapists staffing the service.

This summary for the Committee is written at a time when my members have not yet been given access by Commissioners to the consultation document and have been given only a very brief outline of Commissioner concerns about the service. As a result this summary is necessarily provisional.
My members have now been informed that the Consultation will not start until May which will be a full eight months after Commissioners formally wrote of their intention to go to consultation. UNITE has had to write to Commissioners to remind them of their duty of care to services that they currently commission, a duty not to unnecessarily undermine or destabilise a service.

Service receiver profile
The Psychodynamic Psychotherapy Service works with adults who were deeply traumatised as children by experiences of abuse such as neglect, sexual and physical abuse, and/ or witnessing domestic violence and/or living with parents with problems of alcohol or substance misuse, all with resulting severe and potentially life threatening effects in their adult life. Many Service Receivers have self harming behaviour and have attempted suicide on one or more occasions. Many will have had one or more psychiatric admissions. The majority are likely to have a diagnosis of Personality Disorder.
The service is engaged with has just over 160 Service Receivers but demand is high and staffing limited so that only one in three suitable referrals can be accepted without the build up of unacceptably long waiting lists.
The service offers a stepped care model with a range of options which reflects the need of these patients. Their difficulties require more than shorter term therapies of six to eight sessions and NICE mandates that they should not be treated in psychological therapy of less than three months. The news of the consultation proposal will create great insecurity for this group of vulnerable service receivers.

A repeated consultation
This same consultation took place in 2011/12 and came before this Committee which firmly concluded that this service should be maintained and not decommissioned. My members believe that the outcome of the consultation in 2011/12, which saw the service retained, remains entirely valid and question the need to consult again.
As before the decommissioning of the Psychodynamic Psychotherapy Service would have serious consequences for the care of Service Receivers.

Choice lost
Service Receiver choice of therapy would be restricted to CBT based approaches. For many Service Receivers this will not be the most appropriate therapy and has already been tried. The removal of choice by Commissioners for Service Receivers with severe and complex needs would go against agreed clinical advice and standards such as NICE Quality standard QS88. Service receiver choice and matching to a therapy is recognised as important. The Royal College of Psychiatrists (2008) assert that Commissioners should “ensure real service user choice” as “individuals with the same condition do not respond equally to a given intervention, while an active preference by individuals for the method used is associated with better outcomes”. Choice is not optional.

Evidence misunderstood
Psychodynamic Psychotherapy has an evidence base for its work in the treatment of severe and complex disorders that is comparable to that of other therapies. NICE review of evidence concludes that there is “no clear evidence that one treatment or a type of service provision is more advantageous than another”. In 2011 this City Council Committee took expert evidence from Professor Diane Waller who wrote in her evidence that “there is a large amount of evidence to support the inclusion of Psychodynamic Psychotherapy as an effective therapy for a range of patient groups”. She called on Commissioners to retain the current psychodynamic provision.

Cost effectiveness not recognised
This is a service that helps Service Receivers move towards recovery, reduces their need for further admissions, facilitates their remaining in or returning to work, reduces demands on wider mental health services such as CMHTs, Psychiatrists and GPs and thereby supports the mental health of families and children. As such it is a very cost-effective service.

Priorities unbalanced
Spending on IAPT services for those with mild to moderate range psychological needs has increased 35% since 2014/15 which is an additional £7.4M. Commissioners anticipate it will rise further as demand grows.
At the same time there has been a reduction through unfilled posts in investment in Specialist Psychological Therapies for those with severe and complex needs despite high demand. This proposal to decommission the Psychodynamic Psychotherapy Service would reduce investment by a further £500,000 while leaving a clinically unacceptable gap in services for those with severe and complex needs. We do not understand why Service Receivers with severe and complex needs are seen by Commissioners as a lesser priority.
IAPT funding from the Government was intended to provide additional access to therapies rather than re-place existing therapies. Effectively this proposal would see more highly trained and experienced Psychotherapists lost to Service Receiver care and replaced with therapists with necessarily less training and experience within IAPT.

An absent Psychological Therapies service wide specification
Commissioners are expected to develop proposals and service specifications in partnership with front line clinicians. Commissioners withdrew from such a working group in 2017 and there is no current service wide specification that would provide a context for this current proposal which Commissioners developed in isolation. My members are aware of the financial position of the CCGs. However, removing one type of psychological therapy, without having first previously developed a service specification for psychological therapies, misses the impact on a particular group of service receivers (those with experience of complex trauma in childhood) and puts Commissioners at risk of breaking the NICE guidelines and mandated choice of treatment which is required to be of longer than three months duration.

Equity as an aspiration
We understand that Commissioners are arguing that a service geographically based primarily in the South of the County for historical reasons of investment is not therefore equitable across the County. Their argument we understand is that equity demands the removal of the service across the county. This appears to be equity at its crudest and denies those in the south of the county access to a service that previous Commissioners invested in on their behalf. Also CBT for those with severe and complex needs is similarly geographically based more in the South of the County but this is not used by Commissioners as an argument to de-commission the CBT service.

There is a growth of awareness of childhood abuse and particularly of the extent of sexual abuse in our society and the devastating effect it has on people. My members believe this can not be the time to withdraw a service that offers traumatised adults treatment to work through the emotional consequences of their abuse within the context of a therapeutic relationship.
Commissioners have failed to develop a service specification for Psychological Therapies for those with severe and complex needs that would have provided a clinical context for this proposal. In its absence my members believe that arguments about equity, evidence base and cost effectiveness can only be there to provide cover for what is an essentially financial decision 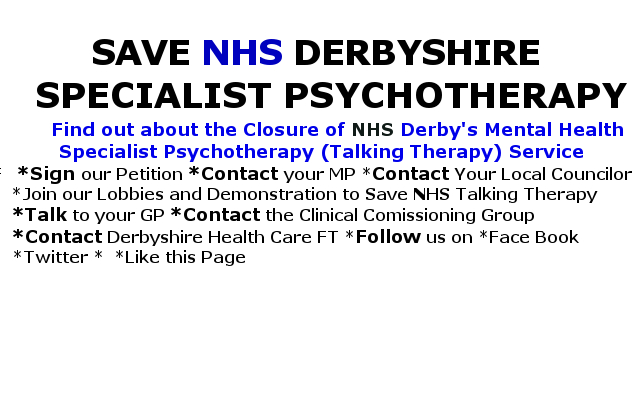